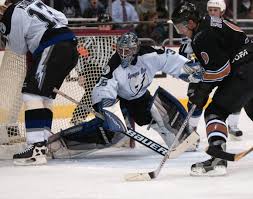 By now, we all know that Massachusetts Senator Scott Brown is a big basketball fan and judging from his latest campaign fundraiser, a baseball fan too. But he may want a brief refresher course when it comes to hockey. Senator Brown was stopped in the halls of the Capitol on Thursday afternoon by a reporter who asked him if he was a hockey fan. The Senator said yes, but when the reporter followed up, asking what he thought he Bruins’ chances against the Sabres were on Thursday evening he responded, “Is that the Washington team?” But before you say that Sen. Brown almost pulled a Martha Coakley, the Globe says, “In his defense, Brown was still jet-lagged from a trip to Pakistan and Afghanistan. And “Downtown Scotty Brown” is far more of a basketball guy.

By the way, the BUFFALO Sabres beat the BOSTON Bruins 2-1 on Thursday night. The Washington Capitals lost to the Montreal Canadiens 3-2 in OT.