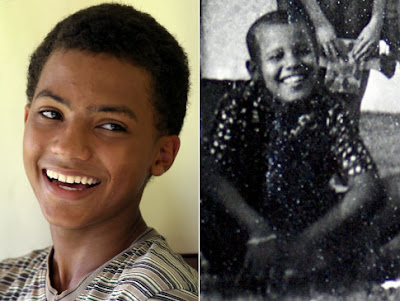 Last week, ABC' Political Punch reported an Indoesian filmmaker was in the process of directing a movie about President Obama's childhood. Based on a fictionalized Indonesian book about Obama's boyhood, Little Obama "is not a film about Obama the world leader-to-be. It's about Obama the kid." The New York Daily News interviewed the actor who will play Obama in the movie, Hasan Faruq Ali.

The young Obama is played by 12-year-old actor Hasan Faruq Ali, a New Mexico native who, like his inspiration, moved to Indonesia as a toddler.

"Hasan has the walk, he has the posture of Barry," said Slamet Djanuadi, a childhood friend of Obama from 1967-1971 when he lived in Jakarta, told the Associated Press. "But Barry was a better ping pong player," he added.

The film, produced by the Indonesian production company Multivision Plus, will premiere there June 17 to coincide with Obama's planned visit to his former home.

"Little Obama" documents Obama’s life in Jakarta with his mother and stepfather from the age of six until he was ten years-old.

"It's not about politics, it's just the story of a boy," he said. "It's about his friendships, his hobbies, just a childhood story."

Hasan was a natural fit to play Obama. The young actor is fluent in both English and the Indonesian language and is the son of a white mother and African American father.

"It feels great to play Obama," Hasan said. "I was shy about it at first ... But then it became easy and fun, especially acting as a very important character who left here to become president."