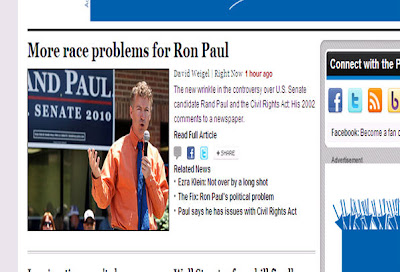 Earlier this month, the Washington Post took some heat for a caption mix-up online where a photo of Malcolm X was paired with a link to a story about President Obama. The Washington Post's Ombudsman ruled that the much blogged about story was "a hoax" despite blogs like Gawker and Daily Intel insisting the screenshot was not photoshopped.

Well, they may have done it again. Last night, as I was searching the Post Politics site, I came across not one, but TWO errors. Two blog links talking about GOP Kentucky Senate nominee Rand Paul's comments on civil rights had his father's name, Ron Paul, in the title instead.

I'm not trying to rag on the WaPo, the Post admittedly has said they are correcting the way they correct corrections, but they may want to consider finding someone else to oversee the Post's web site.
Posted by Pamela at 7:33 AM