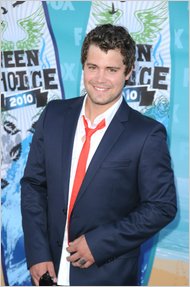 Levi Johnston’s finally getting his reality show and you’ll never guess what he’ll be doing in it—he’s running for office. Johnston's manager, Tank Jones, on Monday confirmed a report that Johnston is planning to run for city office in his hometown of Wasilla, Alaska, as part of a reality TV show. Jones said Johnston is serious about a run, either for mayor or City Council. According to the Wasilla city clerk, the next mayoral election is in 2011. The candidate filing period for council elections this October closed July 30. Johnston isn't listed among those candidates. But Tank Jones insists this isn’t a stunt. "This is not a spoof. This is not a joke," Jones said.

Cameras will chronicle his campaign as part of "Loving Levi: The Road to the Mayor's Office," a reality show about the 20-year-old single dad's search for love and political legitimacy.
Posted by Pamela at 1:06 PM