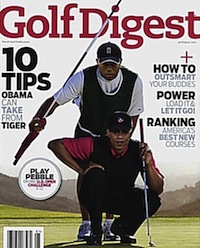 The January cover of Golf Digest featuring a picture of President Obama and Tiger Woods with the caption "10 Things Tiger Could Teach Obama" was lousy timing to say the least. But according to Mediaite, now the magazine thinks it’s on to something--suggesting that the president called Tiger during the blizzard of bad press to offer words of encouragement? They write, “According to the April edition of GD, both Barack Obama and former president Bill Clinton called Tiger to offer reassurance and guidance. Is it true? The POTUS camp says no, according to ABC’s Jake Tapper via Twitter, although the wording in the article is vague enough to imply that the President’s camp made the phone call, but did not speak to Tiger directly. The Golf Digest passage read, “President Obama also made a personal call to offer encouragement. So did Bill Clinton, whose experience might be particularly instructive.”
Posted by Pamela at 1:09 PM