Michelle Obama Hates Being FLOTUS (or Does She?) 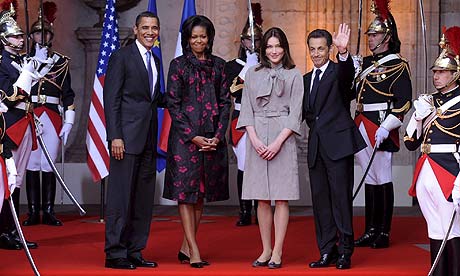 “Don’t ask! It’s hell. I can’t stand it!” the biography has Michelle Obama telling Bruni after being asked about life as the wife of the president during a Sarkozy family visit to the White House in March. A spokeswoman for First Lady Obama, Catherine McCormick-Lelyveld, told ABC News “the First Lady never said that.”A spokesman for the French Embassy to the US, said, “Mrs. Bruni Sarkozy distances herself completely from the content of the book ‘Carla and the Ambitious’, which was not authorized and the authors alone are responsible for its contents. The words attributed to the First Lady of the United States were never said.”

The UK Daily Mail had the story yesterday.
Posted by Pamela at 8:01 AM