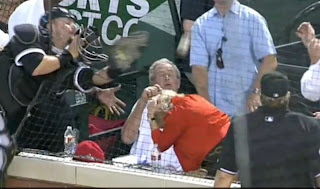 A.J. Pierzynski made the valiant effort, but ultimately failed to save former President Bush from a baseball headed his way. ESPN’s writing, “The Chicago White Sox veteran catcher was unable to grab a foul ball in the first row Monday night that nearly hit former President George W. Bush and his wife, Laura. The ball was just behind the screen, but Pierzynski was able to reach around it and in front of President Bush, who was going to make his own play on the ball at first but flinched at the last second. The ball hit the ledge in front of the first row, though, and bounced into the seats. "I just told him just because he was the President doesn’t mean I won’t jump on top of him," Pierzynski said. "Him and his wife got a good chuckle out of that one."

Watch the video of the play here.
Posted by Pamela at 6:56 AM