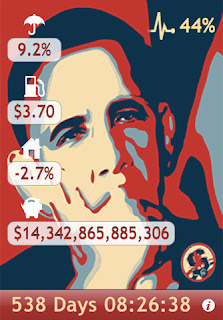 Counting down the time until President Obama leaves office? There’s an app for that!

The Daily Caller’s writing about an “Obama Clock” app that displays polling data on the President’s popularity along with the U.S. unemployment rate, the gasoline price index, housing values, the national debt — and the amount of time remaining until the next presidential inauguration. The app costs 99 cents and was launched on August 4th. Jeremy Ross, the apps creator, said he’s charging 99 cents for the app in order to prevent its ratings from being downgraded by people who dislike it for political reasons.