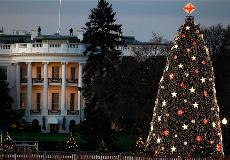 Later tonight, POTUS will join THE POTUS to light the National Christmas Tree!

Join us tonight for an exclusive event, the 2010 National Christmas Tree lighting LIVE from President's Park in Washington, DC. Tim Farley and I will be LIVE from the ellipse as the First Family participate in this annual tradition.

President Barack Obama will read a message of peace, while the first lady is slated to read the classic poem “’Twas the Night Before Christmas.” The first daughters will be there, too, helping their parents light the tree.

And like any POTUS event, this is sure to be star-studded. Celebrity performers include Maroon 5, 10-year-old singing prodigy Jackie Evancho, blues legend B.B. King, rapper Common, singer Sara Bareilles and Jim James of the rock band My Morning Jacket.

The broadcast begins tonight at 5pm ET!
Posted by Pamela at 11:51 AM