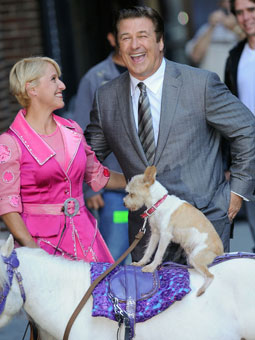 "That's bull----," the 30 Rock star said after the Kennedy Center Honors program, according to a report today in The Hill, a newspaper.

Baldwin has flirted with the idea of elected office before, once contemplating taking on Democrat-turned-independent Joe Lieberman. Baldwin's name came up again this year, this time in connection with a House seat in Long Island.

Democratic Rep. Tim Bishop has a narrow lead over Republican Randy Altschuler in the New York district, the last race still undecided from the 2010 congressional elections.
Posted by Pamela at 12:26 PM