How Canada does Inauguration 2013

With just under three weeks until President Obama's Inauguration (part deux), embassies all over DC are getting ready to host their own celebrations. But one embassy in particular has some pretty prime real estate along the parade route the First Family will walk. That would be the Embassy of Canada. Yeas and Nays says, “So what do they plan to do with it? For the second time in a row, the Embassy of Canada will host an invite-only tailgate party, complete with Canadian food and booze. The fete will feature treats like Tim Horton's coffee, Beaver Tails pastries (which POTUS devoured on a trip to Canada), Crown Royal cocktails and, of course, poutine -- Quebec's popular dish made with french fries, gravy and cheese curd. Since it is an inauguration party after all, guests will be able to watch live coverage of the swearing-in and be able to see the parade live as it passes by the embassy.” 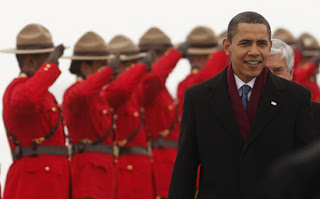