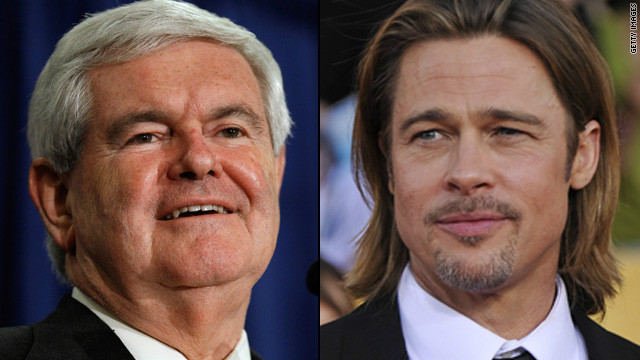 If Newt Gingrich’s life story ends up on the big screen, the former House speaker wants actor Brad Pitt to play his part. In an interview with the “Rich Stevens Radio Show” on Tuesday, the Republican presidential candidate was asked, "If Hollywood was going to do a movie about your life, who would you like to see play the lead role?"

"Oh, in my fantasy life? Brad Pitt ... why not?” Gingrich replied. But its not because he thinks Pitt bears any resemblance. "No, I don’t look like him at all,” said Gingrich. “He's thinner, he's better looking, he's younger. But you asked me if I had anyone who could play me in a movie, why not go for Brad Pitt? Look if you’re gonna go for it … You gotta relax and just, you know, let your imagination soar.”

As Juno would say, "Dream Big."

Getty Images
Posted by Pamela at 9:49 AM