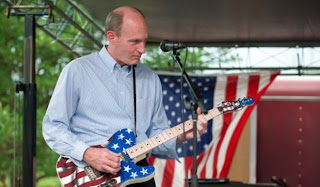 You’ve all heard the news by now, the band R.E.M. announced they were splitting up on Wednesday.

And now Congressman Thad McCotter (R-MI), GOP presidential candidate, is bummed that he never got to see them play live. "What's Peter Buck going to do now?" McCotter told The Ticket. "That's too bad. I just downloaded all my stuff onto my iPod late last year during the lame-duck session. And it was one of the ones I found myself going back and listening to. You know, especially when they do the Velvet Underground covers." "I'm bummed, that's too bad," he said. "But all things must pass. They had a good run."
Posted by Pamela at 7:42 AM